Hearst Newspapers participates in various affiliate marketing programs, which means we may get paid commissions on editorially chosen products purchased through our links to retailer sites.

Ways to Avoid Confrontation With Your Boss 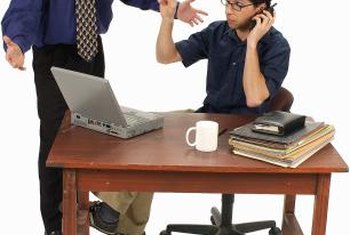 Conflict and even confrontation can be productive in some situations, but there are also circumstances in which avoiding a direct conflict is wiser. Confronting a difficult supervisor can cost you your job or damage your future career prospects with your company. Sometimes, deliberately avoiding a confrontation and using other methods to work around your conflict will work to your benefit.

If your supervisor responds defensively to criticism and interprets all disagreement as insubordination, a direct confrontation could get you fired. Arguing with your boss repeatedly can also damage your reputation in the workplace, making it harder to win promotions or pay raises. Even if your difficult supervisor eventually is removed from the position, your reputation could still suffer if co-workers and other managers perceive your actions as unprofessional. It is sometimes more effective to deal with difficult supervisors without confronting them.

When you feel the urge to confront your boss, remember that he sees the situation differently than you do. It might seem obvious to you that your boss is in the wrong, but imagine yourself in his position. Ask yourself how your supervisor would perceive your actions. Could any of his criticisms be legitimate? Trying to understand the other person's point of view can help you control your emotions and approach the situation with greater empathy. Ask your boss how he wants you to handle the situation. If you ask for his advice and guidance, he might see you as an ally rather than a threat, and his attitude toward you might improve.

Don't let your emotional reactions control your behavior. If you react emotionally to your supervisor's words or actions, the conflict will probably escalate to a confrontation. Instead of expressing anger or some other negative emotion, try to deflect your boss's negative comments by agreeing with him. For example, if your supervisor criticizes you for not handing in a report on time, just apologize and promise to get it to him right away. Even if your supervisor is extremely difficult to deal with, try to behave professionally at all times. If your supervisor is truly unreasonable, he might not last very long at the company anyway -- but others might remember the professional way you handled him.

If you need to have a difficult conversation with your boss, avoid placing blame or making accusations. People almost never react well to feeling attacked and criticized, whether they are in the wrong or not. Do your best to listen attentively to what your boss has to say, and make your own points as calmly as possible. Try to be open to your boss's position. Ask questions to make sure you really understand what he wants to communicate to you. Try to think of the conversation not as a confrontation but as a collaboration, in which you and your supervisor can find a solution together.

Scott Thompson has been writing professionally since 1990, beginning with the "Pequawket Valley News." He is the author of nine published books on topics such as history, martial arts, poetry and fantasy fiction. His work has also appeared in "Talebones" magazine and the "Strange Pleasures" anthology.

How to Deal With Sabotaging Colleagues

How to Deal With Insults at Work

How to Deal With Bosses Who Put You on the Defensive

How to Handle a Hostile Coworker

How to Curb Workplace Jealousy

How to Deal With a Disrespectful & Screaming Co-Worker

How to Handle Hate Toward Coworkers

How to Deal With Tattletale Coworkers

How to Deal With an Argumentative Boss

How to Communicate With a Rude Boss

How to Work for a Dominating Boss