Hearst Newspapers participates in various affiliate marketing programs, which means we may get paid commissions on editorially chosen products purchased through our links to retailer sites.

How to Deal With Passive-Aggressive Coworkers 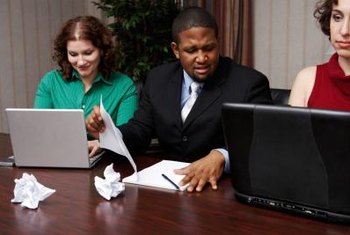 It might seem that passive-aggressive behavior is indicative of a dual personality, but it's not. Passive-aggression is an intentionally deceitful way to cut down someone without just coming right out and expressing your dislike for or anger with that person, who, in this case, is a co-worker. Passive-aggressive co-workers who engage in disingenuous behavior might pay you a compliment but not be sincere about it, or they might act very kind within earshot of colleagues, but cold and unfriendly when it's just the two of you.

Refrain from engaging in a back-and-forth exchange with the co-worker. It's virtually impossible to outdo a passive-aggressive person's remarks, and doing so simply puts you in the same category. One way to catch the passive aggressor off-base is to pretend that you believe her compliments are sincere. Don't buy into the sarcasm or anger you believe underlies the misleading compliments or smiles. For example, when a co-worker says that you're exceptionally good at cozying up to your boss, you could say, "Thank you, I like to let others see my talents and capabilities."

Suppress your frustration or your own angry feelings about a passive-aggressive co-worker. You may not be able to totally ignore your co-worker, especially if you work in close proximity; however, you can refuse to let the disingenuous remarks get under your skin. At some point, finding clever ways to frustrate someone gets tiring when the person at whom the actions are directed simply doesn't respond.

Avoid asking your supervisor or manager to intervene. You may not get the support you want, because reporting minor incidents to your supervisor will cast a negative light on your ability to resolve workplace problems using your own resources. The only reason you should go to a supervisor or manager is to report behavior that crosses the line into unlawful harassment that affects your ability to do your job. If the passive-aggressive co-worker's comments and behavior don't impact your job performance, then it's probably just a character flaw you will need to overlook.

Ruth Mayhew has been writing since the mid-1980s, and she has been an HR subject matter expert since 1995. Her work appears in "The Multi-Generational Workforce in the Health Care Industry," and she has been cited in numerous publications, including journals and textbooks that focus on human resources management practices. She holds a Master of Arts in sociology from the University of Missouri-Kansas City. Ruth resides in the nation's capital, Washington, D.C.

How to Deal With an Abrasive Boss

How to Deal With Insults at Work

How to Survive Backstabbers in the Workplace

How to Get Along With Co-Workers Who Love Drama

How to Handle Workplace Bullies & Interrogators

How to Handle Hate Toward Coworkers

How to Deal With Tattletale Coworkers

How to Handle Annoying and Obnoxious Coworkers

How to Tune Out an Annoying Person at the Workplace